The Passive House that Costs €70 a Year to Heat

Sitting outside Kilbride in Co Wicklow, this contemporary family home has very much kept it in the passive house family — homeowner Aine Dowd is the sister of Passive House Academy founder Tomás O Leary, and the house was designed by their brother Cathal’s architecture practice OLS.

Naturally Aine and her husband Frank spent some time in Tomás’s own Wicklow passive house —  Ireland’s first, built way back in 2007 —  before choosing to aim for the standard on their own build.

“When we visited him we loved the draught free comfort and heat in his home,” says Frank. “A turning point was staying over one snowy night and waking in the middle of the night to find the house as warm then as it had been earlier in the evening.”

But with their own greenfield site to build on, what did he want from a family home? “We had a beautiful site and we wanted to maximise our views.  We also wanted a fuss free functional home, with room for ourselves and four growing teenagers.”

In order to achieve planning permission, an original timber chalet on the site had to be retained. OLS achieved this by elegantly incorporating it into the design of the new dwelling, signified by the timber facade, which makes for a neat contrast with the new, rendered surfaces.

“The biggest challenge on site was probably working around and retaining the existing chalet while at the same time achieving the passive house standard,” says architect Cathal O’Leary.

This building is far removed from the sort of compact, box-like forms that make it easier to meet the passive house standard. The old chalet determined the location and orientation of the new home, which faces south-west. However, this orientation has led to some overheating inside on summer evenings – a problem which was flagged at design stage in the PHPP calculations.

OLS did design a brise soleil to shade this elevation, but it has yet to be installed.

“We generally do not use internal or external blinds for reducing overheating in our PHPP calculations as the majority of people want to look out into their gardens on the few sunny days we get,” says architect Cathal O’Leary. The lack of brise soleil means that the house is more subject to the good and bad aspects of passive solar gains. While the space heating demand as designed was a miniscule 15 kWh/m2 /yr, the absence of the intended external shading has dropped that down to just 11 kWh/m2 /yr. But it comes at the cost of overheating:
the house is calculated to exceed 25C for 11% of the year, compared to 4% if the brise soleil was in place.

The house is of timber frame construction, clad externally with blockwork, and insulated with both mineral wool from Knauf and rigid PIR boards from Kingspan  insulation boards. The roof is of similar construction, and the whole house is heated by a Danfoss air-to-water heat pump that supplies underfloor heating.

Impressively, the finished house manages to be both visibly contemporary but not too flashy, with the tidy form and low profile crouching behind trees on the site. So what is Frank’s verdict, having lived in the house for four years? “We love the level of comfort in the house.  We maintain a constant temperature throughout the day and we have no draughts or cold rooms. On cold days, the condensation is on the outside of the windows.”

Having both a heat pump and mechanical ventilation unit does mean their electricity bills are slightly higher than before, he says – a fact which is bound to owe much more to the domestic hot water needs for a family of six than the combined heating and ventilation needs of such a low energy building. “But we don’t have any other fuel bills so overall it is far more cost effective every year than our old house.” 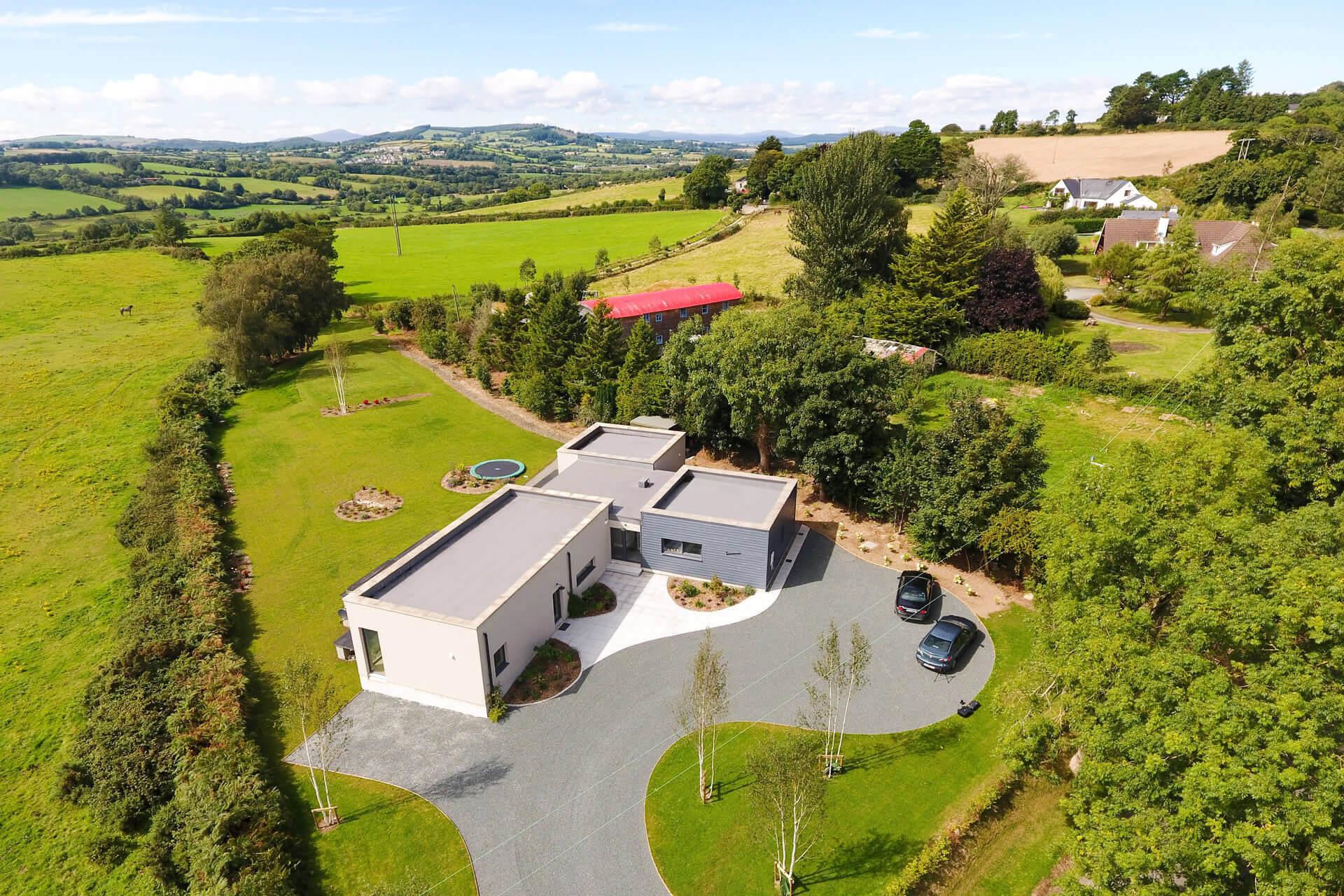 Unfortunately, definitive figures of the annual space heating costs for this house are unavailable. The 2013 project pre dated the decision by heat pump supplier Danfoss to provide heat meters on their heat pumps. But an analysis by energy consultants 2eva.ie for this article to establish an indicative Building Energy Rating sheds some light. The calculated space heating load for the heat pump is just 739 kWh per year, to deliver an output of over four times that amount of heat, thanks to a highly efficient air-to-water heat pump. Assuming a rate of €0.14 per unit, that’s just €103 per year on space heating. (The fans to run the ventilation system are calculated to use 608 kWh of electricity, adding about another €85, but although heat recovery ventilation helps reduce the heating demand in passive houses, this electricity cost should arguably be regarded as a ventilation energy cost, rather than a heating cost.)

But these figures come with a major caveat: Deap, Ireland’s national energy performance calculation methodology for homes, assumes temperatures of 21C in living areas and 18C in the rest of the house, which works out at an average of 18.49C in this house. And it only assumes the house is being heated to those temperatures for eight hours a day, and only during the heating season.

The passive house software, PHPP,instead assumes a whole-house minimum of 20C, 24/7, all year round. But this higher comfort assumption doesn’t mean PHPP would predict higher energy use, as the two software tools calculate the building’s energy demand differently. In this case, a PHPP-calculated space heating demand of 11 kWh/m2 /yr corresponds to 2165 kWh per year of delivered heat. Based on the Danfoss heat COP of 4.3, that means a predicted electricity use of just 503 kWh per year. Which would mean €54 per year in heating costs.

So, taking the two calculated results and our assumed electricity price at face value, it’s either €70 or an extra €30 per year – enough to subscribe to this magazine and still have change for a pint – to heat a 217 sqm home.

Please see the full article below..