What Architects Really Do - Through Eyes & Ears of a Student 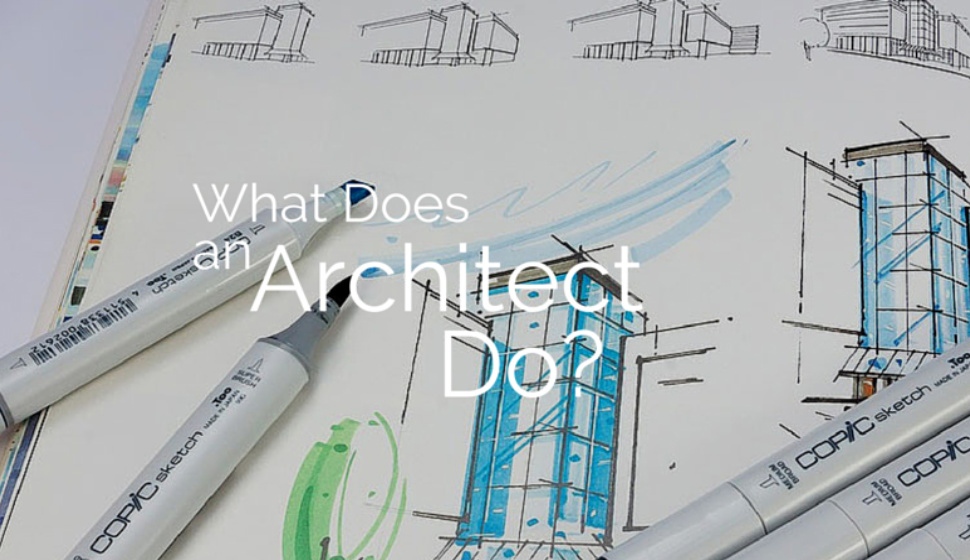 We have often wondered how people outside of our industry really perceive our day to day tasks as Architects, and if anybody really understands what we do. So when Sam was due to join us in our office for a week of Transition Year Work Experience earlier this year we thought it was a great opportunity to get a little insight into what people think about what we do. And it helped that Sam was a great artist with words!

I believe that an architect’s job includes a series of tasks that are all combined into the main job, just like many other jobs for that matter. They have to complete many drafts and sketches for future projects and on-going ones. They design buildings and structures. The job entails that they have to check and double check that everyone’s planning and prints are logical, accurate and possible to build. They hold meetings to discuss on-going and future plans of production and building as well as legal complications.

They also have to obey many factors such as planning permission and government property such as pluming pipes, electrical wire, fences, roads, fields, etc. They also have to keep certain aspects of the local community in mind such as leisure and activity sites available for members of the community as well as recreational areas for members of the public.

They have to be aware of the locals living in the area where they will be building and who owns the areas in close vicinity to the building site. They also deal with legal and accounting problems like any other jobs and companies. They make sure all prints and ideas for builds are in proportion, logical, practical and have aesthetic.

The job also includes the many boring factors of an office job such as:

There was a meeting being held with a contractor that the company were having trouble with at the time. I learned that this is often common between architects and contractors, their disagreements are a part of their job and they have to deal with what is thrown at them because of this. I spent my morning folding up prints and plans so they would be ready for the meeting when the contractors came to discuss the site.

So far since I’ve been here I’ve realised that it isn’t just a work place. Everyone here is so loving and funny, yes they take the piss out of each other like we all do to our friends and there is no hateful bone in anyone’s body. It is like a small tight family and I’ve had the wonder of experiencing that in my first 3 days here.

So far I’ve helped around the office on what needs to be done and helped with the research that they are too busy to get around to doing. Everyone is so nice and talkative and friendly in the office and the atmosphere is welcoming. At times it can be boring as I have finished working on something and they try their best to give me something they think I might enjoy doing as they are thoughtful and want my experience her to be good.

Sometimes they are full up with work that im not qualified to do so I can’t really be much of a help but I try my best in other ways to keep the workload from overflowing onto them. Today was Margarite’s 1 year anniversary at the company, she works at reception and does amazingly and all the work she does. She is very talkative as are the rest and funny, and the company are very lucky and glad to have someone like her as a part of their Company moving forward. On my first day she gave me a tour of the area and showed me where most of things were. She helped me feel welcome and settle in. We went out for lunch to celebrate the anniversary.

Cathal sat me down today to explain many parts of the architecture business, he showed me various buildings and styles. He talked to me about the ins and outs of his job, his college life and projects and also showed me his portfolio and models he has built himself.

I have learned that there is many parts of the Architects job including designing furniture and have to take in the surrounding buildings and make sure that what they are building will not affect or create an eye sore and does not drag away from anything else. There is a design aspect to their job but that is not only what it is about. It also entails maths, logic and a certain amount of creative skills. From the outside look to the locks of a door, they are all included in the job.

They have to figure how to use the space they have to the best of their ability and to what the client would like. I have now realised that there is so much more to their work than I expected and they deserve a lot more recognition than they get. They put their emotion, life and soul into their work and it is easy to see from my time here.

I still believe a majority of what I had said on the first day. An architects job does include what I said but It also includes comparing and making models of the houses and surroundings. It’s trying to find the right argument and logic to show to a client that they should pick something over something else.

It is pouring your love and energy into a project and preparing for the worst. It’s repeating and repeating things for clients. It is going to site, correcting and trying to the best of your ability to make the best product you can. It includes getting into fights with builders, getting sued and let down. It is a hard business to be in and there are different types of architects, but they all have the love for their work in common.

I have learned many things from my work experience not only in the business element but in life also. Architecture may not be a career path for me but I very much enjoyed my time at the placement and everyone was so nice and welcoming and I believe that had a big impact on how well I got on with my experience. I will miss everyone that works here at O’Leary Sludds Architects even though it has only been 5 days, a work place isn’t just a work place and I’ve learned that from my time here.

While we were unsure what somebody from outside our architectural world would make of our office and the work we do, we were pleasantly surprised and greatly humbled by Sam's view on our great team.

Sam was an absolute pleasure to have in the office. He fitted in like a true member of the team; he even nearly got adopted by Triona!